It doesn’t matter where you are in Puerto Rico- your block, your school, or in a downtown plaza- someone will always be selling frozen fruit juice pops called limbers. My Abuela Alicia lived in a tenement building in Rio Piedras and had a neighbor that would sell them out of her apartment. My brother and I would hand her fifty cents through a gap in her wrought iron door and in return we would get two little dixie cups filled to the top with frozen sweetened coconut milk. It was the tastiest way to stay cool in a world with no air conditioning.

These frosty, refreshing treats are named after Charles A. Lindbergh, the first pilot to fly across the Atlantic Ocean. On his 26th birthday, he flew alone to Puerto Rico and enjoyed the icy fruit juice pops so much, locals named them after him. Limbers are usually served in the small plastic cup they were frozen in and come in as many flavors as there are fruit trees: lemon, pineapple, lime, tamarind, raspberry, you name it. My favorite has always been mango. Beat the heat with this easy recipe that takes you straight to my little island. Buen provecho! 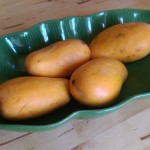 Champagne mangoes truly are the “champagne” of mangoes. 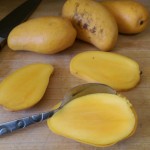 If the mango flesh doesn’t scoop easily with a spoon it isn’t ripe enough. 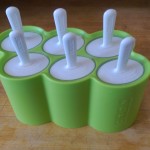 I scored this frozen pop mold for $8 at Michaels! It’s been an awesome addition to my kitchen and an easy, fun activity for Danger and I.

About the Author: IslandGirl

Hi I'm Monti! Though I spent half my childhood in Puerto Rico and half in the States, my little island's flavors are a part of my DNA. Every bite takes me back. Care to come with me?