When it comes to building flavor, the french have mirepoix (onions, celery, carrots) and creoles have the holy trinity (onions, celery, bell peppers).  Puerto Ricans have sofrito.  While it is the base of hundreds of Puerto Rican dishes, sofrito is derivative. You see Puerto Rican cuisine is the original fusion cuisine, with influences from Africa, Europe, and Asia. Much of our food is adapted from different cultures and sofrito is no different.

This powerhouse of flavor was brought to the island by Italian immigrants that relocated in the 1800’s during the Second Industrial Revolution. The Italians (along with other Catholic immigrants from Ireland and Corsica) were granted land after swearing loyalty to the Spanish Crown and allegiance to the Catholic Church via Spain’s Royal Decree of Graces. The Italians contributed many recipes to the Boricua’s culinary landscape, but none more influential than their soffritto.

Italian soffritto (onions, celery, carrots, garlic, and parsley) can sometimes include a meat like pancetta, bacon or prosciutto.  Puerto Rican cooks kept the onions and garlic but ignored the carrots, celery, and parsley. Instead, they used island peppers known as cubanelles and ajis dulces (a sweet pepper that looks very much like a habanero). They subbed parsley with cilantro and recao (AKA culantro or Mexican Coriander). Sometimes tomato, ham or salt pork was also added. Sofrito was (and still is) used as a base for most of our soups, stews, beans and sauces.

There are as many recipes for sofrito as there are cooks on the island. They can be complex with a dozen different ingredients including olives, capers, roasted red peppers, salt, pepper and oregano. I prefer a simple sofrito, that I make in batches and freeze in ice cube trays for convenience. This gives me the freedom to add more levels of flavor if and when I want to.

My recipe for sofrito is a mixture of garlic, onion, recao, cubanelle peppers and ajis dulces. I also like to add a little smoky heat, nothing overpowering as that kind of spiciness is not found in traditional Puerto Rican cooking. The spicy aji caballero usually does the trick. Sourcing some of our island ingredients can be difficult, so here are some good substitutions if you find yourself coming up empty handed:

For this preparation, I suggest Mongo Santamaria’s Sofrito. It’s got a nice slow build that ends up bursting with sabor! (Just like its namesake.) 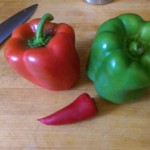 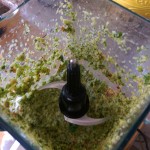 Your sofrito should be a chunky paste, not liquid. 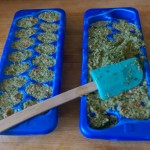 Spread the sofrito with a rubber spatula. 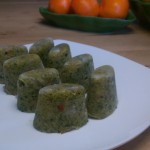 About the Author: IslandGirl

Hi I'm Monti! Though I spent half my childhood in Puerto Rico and half in the States, my little island's flavors are a part of my DNA. Every bite takes me back. Care to come with me?